The Economics of Yoga

When Brian suggested that I write on this topic many things came to mind. As the owner of a small yoga retreat, which was born out of a vision to keep a family tradition and home alive, the topic was related to the economics of running this small business.

The Economics of Yoga
Donna Davidge/Amrita

When Brian suggested that I write on this topic many things came to mind. As the owner of a small yoga retreat, which was born out of a vision to keep a family tradition and home alive, the topic was related to the economics of running this small business.

When you do yoga, whether new or for years, things start to shift in life. Some people quickly shed unhealthy habits, others work hard on their asana practice, not yet seeing the awareness inherently discovered in that, perhaps one day opening up to it. 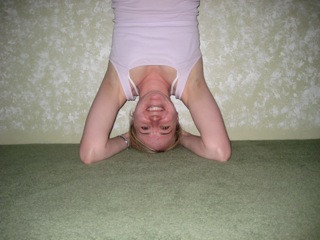 In my life yoga was not approached initially from an economic viewpoint but rather as a spiritual practice with a resultant finding of a way to cope with the waves of emotion and challenge in everyday life. However, if it is the way one to decides to devote ones life there comes the inevitable question of “Will this sustain me financially?” When I first started teaching, in the mid 80’s, yoga was a very different experience. When I walked in to teach a class, which was Kundalini at that time, students rarely cared what form of yoga it was as long as they “ got their yoga’. As yoga has evolved into a popular commercialized and corporatized thing in our capitalistic culture it has been interesting to watch. 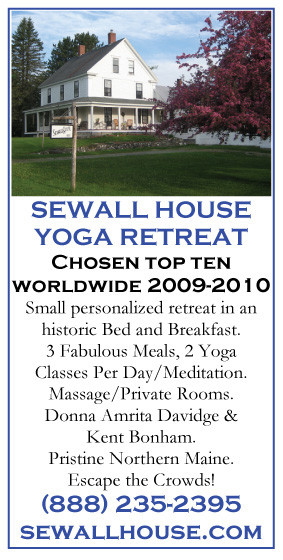 In 1997, when, with honest trepidation, I purchased my great grandfateher’s homestead in northern Maine, I did the best I could to apply the principles of what I was practicing in yoga, which includes constant looking at the self, to create and run this business. It meant learning a lot of new things, which is still happening, developing a system, as well as the practical side of making it work financially. Today many savy teachers are using the internet to let the world know about them, whether it be You Tube, Facebook, a website or Twitter. The timing of Sewall House was lucky because we have had a website since 1999 and were ahead of the slew of retreats world-wide. It still has been a challenge to make it work season to season and juggle a teaching schedule in NY City, both to keep my devotion to teaching, and study, going and manage all the overhead related to this small yoga business. We have put much of what we make back into it and , without investors, looked to loans and the ways that many businesses work.

When it comes to the economics of yoga, there is, like in a yoga practice, no absolute. I would recommend that anyone looking to start a yoga business without the support of a large company, like Gaiim, be realistic and take baby steps, even while pushing the comfort zone envelope. As a free lance teacher in New York City since 1985 and a retreat owner since 1997 this is the method I have practiced. There is a reality that those teachers who get “on the circuit” of the conferences and larger retreat centers have a great advantage in terms of outreach, which helps build the client base and thus your economic situation as well. Some years ago someone introduced me to the owner of one of these large centers who said that, because I had my own retreat center (with 6 bedrooms!) I was considered competitio and it was consideed a conflict of interest, He said that I might e considered were I a best selling author ( and I have still to write the book I have had an idea about for years because I don’t want to just “write a book”, nor will it likely be a best seller).

There is another reality when one decides to teach. A lot of people are becoming teachers and the path is paved with a lot of eager inspired teachers wanting to find a career as a teacher. My manager at a health club I have taught at since 1991 ( and , yes, I still do, though some people have asked me why do I still teach at this health club. It is a regular job and I get to teach the variety of types of yoga I now know, which is a bonus experientially as a teacher). recently saw on the news that, in this economy, yoga teacher is a good career to consider because the average salary is $100,000. I would really like to know where they got this fact. There are senior teachers, and a few not so senior, very ambitious younger teachers, who are making incredible amounts of money, but I now liken that to the star system of Hoolywood. Gurmukh, who owns the center that I teach ta in New York City, said at a teacher meeting that becoming a teacher is not about DVDS and books and fame. It is something that happens and those that are did not know, for the most part, that would be their destiny when they started teaching so many years ago. I also heard that her recent teacher training in India, limited to 50, ended up having 95! We just had out first training, as a student requested it, and had 3. It was great, intimate and fulfilling, but people don’t just sign up so easily for those teachers that are not a “name”.

This is not a judgment, simply a reality.