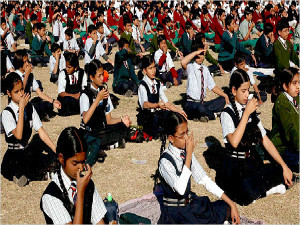 Sometimes, all sides of an argument seem to border on, if not go fully into, the Ridiculous. This is one of those issues.

First of all, the Constitution says *Congress shall make NO LAW respecting the establishment of religion.* … What is it about no law that no one seems to under stand?

It means that Congress shall keep their nose OUT of the religious issue ALL TOGETHER. And that means so shall the rest of the *government* because if Congress makes NO LAW, then there is NO LAW for the Executive branch to enforce. The Supreme Court should only get involved to say SORRY, we The State are supposed to leave these issues up to The People and The States and keep our nose out of it.

If the Christians or Judeo-Christians or Jewish people in America were actually following the teachings of the Bible, Old or New Testament, about 90 percent of what the United States government is doing would be anti-constitutional, AND anti-Biblical. Yet, everyone wants their Special Interests taken care of, and people only read into specific sections of the Bible what suits their argument, while ignoring the rest.

Recently an *Indiana University religious studies professor* called the separation of Hinduism from yoga postures as *odd* clearly has NO historical nor philosophical understanding of the issue all.

But I guess she can be excused for lack of knowledge or insight. Go see how many so-called *Constitutional Attorneys* know about this Biblical stuff, or have ever read, for example, the Federalist Papers? Very Few. That’s why modern constitutional law is so completely divorced from anything the Constitution actually says. This *living document* doctrine of the Supreme court was set up by counter-revolutionaries to allow The Federal State to stick its nose where it should not, and never should have, ever been.

Then, there is the truly silly idea that modern postural yoga is from *Ancient Hindu teachings.* This is about as false as you can get. The vast majority of modern *yoga* postures were imported into India from EUROPEAN gymnasiums in the early 1900s to help get Indian men more strengthened up. (See the excellent and extremely well researched book, *Yoga Body* by Mark Singleton, available at Amazon.) All but maybe half a dozen modern *yoga postures* do NOT come from ancient Hindu practices. Of the ones that do, few of them even look much like what most *yogis* are doing in American yoga classes.

Yes, a few Indian Hindu types added some “ancient spiritual ideas” on top of the European physical stretching postures for sales purposes. *Ancient mystical practices* sell better than modern muscle building & stretching exercises from Europe. And yes, many of those Hindus from India figured out how to sell stuff to gullible Americans, and made some really big bucks, until many of them got caught messing with the girls, or whatever.

But the idea these are *worshipping of Hindu Gods* is complete, silly propaganda or outright nonsense from either intentional connivers or wholly misguided people who don’t spend much time studying REAL history or philosophy or religion.

All a person needs to do is examine an extensive Sanskrit lexicon and it will be clear that the very word YOGA itself has MANY meanings – where actually the majority of definitions, have NO spiritual or religious connotations AT ALL.

To call what Americans are doing *yoga* is to use the lexicon’s definitions that are either little or not *spiritual* or *religious* at all. You would think a religious studies professor would have taken the time to look up the words in a dictionary. But that, however, seems as though it is too much to ask.

Then let us comment on the Catholics who eat bread and drink wine as they “participate” in Christ’s Sacrament.  Is that any different than saying a physical therapist who shows a patient how to stretch their abdominal muscles by lifting themselves up on their outstretched arms — (often referred to as *cobra* stretch) — then the physical therapist is teaching their patient a Hindu God Worship technique?

How about Jesus Christ? He was an advocate of what he himself labeled *napsha,* an Aramaic word he used MANY times in the New Testament. In the Old Testament, the word is *Nephesh.* It is a DIRECT reference to a meditative (yogic) frame of mind, well described here:

Naphsha is the controlling core, the managing agent, the source of physical and mental, development, and may be used to designate the results of its operation. The term may be employed to any functioning entity involving human beings, as, for instance, a house, city or country. While every human has a naphsha by virtue of his existence, the results achieved by this controlling entity will be impaired by its subordination to an improper will, in which event, behavior, ideation, and physical well-being shall deteriorate.

Scroll down to the bottom 1/4th or so of the page, and you’ll see that Jesus was VERY meditative in his teachings, but the ideas were translated OUT of the Bible, maybe for the same reasons the United States “government” does not want you knowing what’s in there either. The Kings of Europe hated the printing press, because it allowed the average peasant to actually read what the Bible really says, which started the erosion of the power of The State and Kings & Royalty in general. The vast majority of Christians today gloss right over the most critical passages relevant to the issues at hand here.

But Abraham, Moses, and Jesus too, had that problem too. They kept telling people to stop worshipping false gods, like The State, and become radical de-centralists, to folow the 10 Commandments voluntarily on their won, without an authoritarian government to rule over them. But the Israelites of that day, and Americans today, love(ed) their centralist states because they dole out the benefits & distractions by the fistful.

To top it all off, much of American postural yoga comes from people who were very little or NOT tied to Hindu practices at all. MY yoga teacher is VERY into conscious connection between body and mind with a very *spiritual* orientation, depending on how you define the word *spiritual.* AND … he is a hard core Atheist.