Growing spirit of cooperation between three different yoga centers represented at the BaliSpirit Festival’s openings for yoga teachers, so maybe you should give Bali a try?

“When the tide is high, all the boats rise,” said Charley Patton, founder of Ubud’s Yoga Barn, who discussed the growing spirit of cooperation between three different yoga centers represented at the 2011 BaliSpirit Festival’s opening press conference.

Ogilvie and Talucci expanded on the Festival’s message of unity from diversity, noting how a common state of mutual gain, rather than competition, can allow abundance to overshadow worry, particularly among business groups that can flourish together. 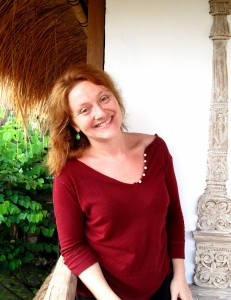 Kusumawardhani discussed the relevance of the Festival’s continuing community service initiative (AYO! Kita Bicara HIV/AIDS), and its unique efforts to bridge the gap between Hindus and Muslims in Bali.

Patton further went into the history of the Festival and discussed the culturally rich elements of Bali that have allowed the Festival to succeed every year since it started in 2008. Ogilvie, who taught a workshop that same morning, supported the Festival’s service elements as an important branch of the yoga tradition.

Ogilvie suggested that the benefits of a service–oriented and giving mindset contributes to creating ripples of generosity, which can free people into living less complicated lifestyles.  by supporting and donating to worthwhile causes and not clinging to resources unnecessarily, “we can live more simply, so others can simply live,” reasoned Ogilvie. 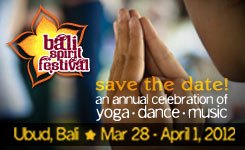 Ogilvie went on to express satisfaction at the camaraderie between instructors that was encouraged at the Festival, explaining that he enjoyed the experience of switching roles from teacher to student when he joined workshops led by his world renowned peers.

Finally, Patton expressed excitement about the growing global consciousness movement that was blossoming in the Balinese town of Ubud at this time. According to Patton, this momentum was strong enough to firmly challenge the notion that Bali was under threat from thrill seekers. Patton believed that Festival’s presence was crucial to this nascent movement’s continued success.

Both Yoga Barn and Desa Seni have dedicated pavilions on Festival grounds, while John Ogilvie will be leading workshops at the Festival on Thursday and Friday.