People in a partying mood, including performing artists the Phenomenauts, gather in front of the closed Family Radio station offices of radio evangelist Harold Camping, to celebrate irreverently, the non-destruction of the world predicted by Camping, Saturday, May 21, 2011 in Oakland, Calif.. (AP Photo/Dino Vournas) 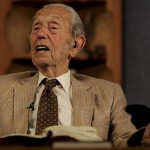 was going to end appeared at his front door in Alameda a day later, very much alive but not so well.

“It has been a really tough weekend,” said Harold Camping, the 89-year-old fundamentalist radio preacher who convinced hundreds of his followers that the rapture would occur on Saturday at 6 p.m.

Massive earthquakes would strike, he said. Believers would ascend to heaven and the rest would be left to wander a godforsaken planet until Oct. 21, when Camping promised a fiery end to the world.

But on Sunday, almost 18 hours after he thought he’d be in heaven, there was Camping, “flabbergasted” in Alameda, wearing tan slacks, a tucked-in polo shirt and a light jacket.

Birds chirped. A gentle breeze blew. Across the street, neighbors focused on their yard work and the latest neighborhood gossip.

“But now I have nothing else to say,” he said, closing the door to his home. “I’ll be back to work Monday and will say more then.”

Camping’s followers will surely be listening. 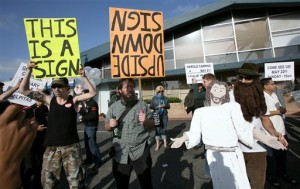