In 2006 when I was working at Yoga Journal, I had a string of phone calls with Dana.  We immediately had a great report and became friends.

In many ways, Yoganomics began with my friendship with Dana Flynn &  Jasmine Tarkeshi, – the co-founders and co-directors of Laughing Lotus Yoga Centers in New York City and San Francisco.

In 2006 when I was working at Yoga Journal, I had a string of phone calls with Dana.  We immediately had a great report and became friends.

It wasn’t until the next year that friendly hello’s and choppy banter evolved into a stroke of genius: Dana told me that Laughing Lotus was getting a second location in my city, San Francisco.   I suggested that I film their stories for a side project I was doing called “Ordinary Yoga”.  Little did I know, the calling the video, “Ordinary Yoga.”  The first episode of Ordinary Yoga was an exercise in expanding the definition of current yoga.   We laughed at each other’s quips and commonality.   At the time (2006) I was still a temporary employee at Yoga Journal and Dana encouraged me to stick with it… and see if I could get hired on as a full-time employee.

Out of a few conversations, the friendship that was formed has affected me personally and professionally in ways I could not understand until much later down the road.

Allowing me the opportunity to tell their stories and to celebrate the success of living a life doing yoga, which is exactly what they love to do.

The stories they tell of Rooftop Yoga in NY and their journey into yoga are unforgettable… their attention to aesthetic attention to detail and the devotion to both their practices, have been an inspiration to thousands of students and also has kept me on the path…. Even during my lowest points.

In Early 2010, I filmed Jai Uttal & Daniel Paul playing at Laughing Lotus in San Francisco.  The size of the kirtan was large, but Jai’s natural demeanor brought in an atmosphere of intimacy.

People in the crowd interacted with one another and at one point there were a series of testimonial stories about meaningful Kirtan’s in Portland, OR and  Hawaii.  Everyone there shared their experiences, and Jai Uttal sang songs the whole way through.  What originally had been scheduled for a two to three-hour workshop continued for almost five hours.

Later that March I went down to New Orleans and filmed Dana Flynn. I seldom met two remarkable people who both “live” so easily and naturally.  The inspire everyone that crosses paths with them. 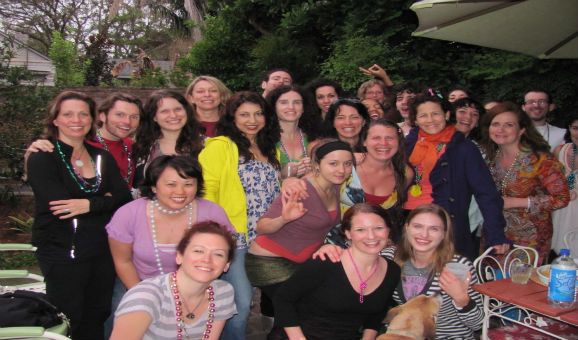